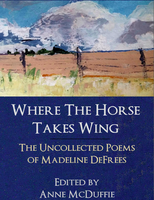 Madeline DeFrees’ poem, “Return of the Blue Nun,” has been awarded a 202l Pushcart Prize. “Return of the Blue Nun” appears in Where the Horse Takes Wing: The Uncollected Poems of Madeline DeFrees. Many thanks to our publisher, Two Sylvias Press, who made this beautiful book possible; Madeline would have been very pleased to share this honor with them.

Thanks also to Bill Henderson and the Pushcart Prize editors. Since 1976, the Pushcart Press has published an annual collection of the best poems, essays, and short stories, submitted by editors of little magazines and small book presses. “Return of the Blue Nun” will be published in Pushcart Prize XLV: Best of the Small Presses. 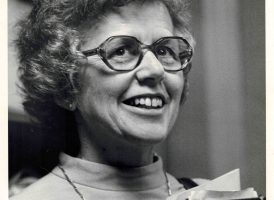 Where the Horse Takes Wing: The Uncollected Poems of Madeline DeFrees, edited by Anne McDuffie, is now available from Two Sylvias Press. These poems include published and previously unpublished poems culled from the DeFrees archive, as well as a selection of Madeline DeFrees’ early work that offers new insights into her evolution as a poet. 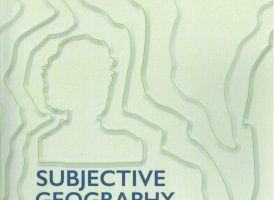 Subjective Geography: A Poet’s Thoughts on Life and Craft, edited by Anne McDuffie, brings together prose pieces Madeline DeFrees wrote over the course of  her sixty-year career, essays and reviews in which she blends criticism, craft and memoir to chronicle her life in poetry.

Subjective Geography is now out from Lynx House Press, the latest addition to the Northwest Masters series published in conjunction with Lost Horse Press. 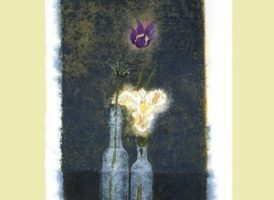 The Seattle Review of Books featured Blue Dusk in their Lunch Date column March 7, 2016. Paul Constant wrote, “She’s thoughtful and earnest and intelligent and a little bit prickly, just like the best of our poets.” Read the entire review here. 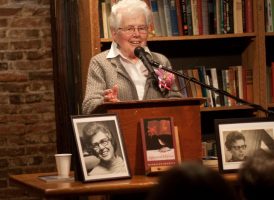 Rick Simonson, Chris Howell, Susan Rich, Elizabeth Austen, Candace Black, Elizabeth Weber, Gary Thompson, Jennifer Maier and others will be there to share memories of Madeline and their favorite poems.

The Seattle Review of Books Celebrates Madeline DeFrees in December 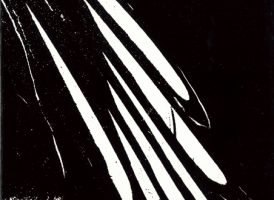 The Seattle Review of Books is publishing one of Madeline’s poems each week during December. You can find links to all the poems here.

Details to follow about a memorial in Seattle. Information will be posted here, or you can contact me if you’d like to be notified by email.