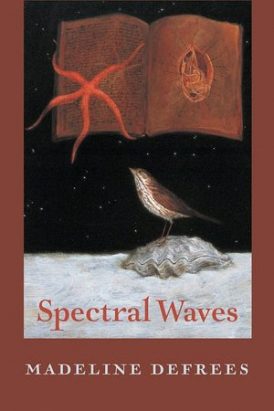 Madeline DeFrees is an unconventional and technically brilliant writer whose new poems range in scope and scale from sonnets about Elvis to lyrics about optical cataracts, birds, and the creatures in her well-tended garden. In this follow-up to her Lenore Marshall Award-winning Blue Dusk, she directly engages the work of Keats, Frost, Merwin, and others in her conversational debates that demonstrate the confidence and familiarity of a poet who has spent five decades practicing her craft. The variety in Spectral Waves speaks to DeFrees’s enthusiasm for art, nature, and what she calls “word worlds”–the esoteric jargon she makes her own in order to expand upon human experience. As the judges for the Washington State Book Award declared, Madeline DeFrees is “far from finished teaching us how to listen and see.”

“DeFrees is committed to rigorous, even ritualistic, forms and a dense economy and precision of language.”–Poetry

“These poems are history lessons from no book of history we’ve been forced to read. They are the best criticism for poets and readers–an absorption of prosody adapted, of poetic ancestry and kinship, sometimes in adoration, but offered slant, bravely spoken and sung.”–The Nation

“Like Dickinson, like the saints whose lives were personal expressions of divine energy, DeFrees is acutely aware of her mortality, but what we experience above all here is a fierce celebration of life in all its difficulty.”–Prairie Schooner

“Her poetry reflects her past, but moves beyond it to create a lasting statement about women and the mysteries of faith.”–The Bloomsbury Review