Later Thoughts from the Springs of Silence 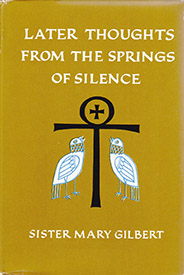 Nuns seldom hesitate to “attempt what’s perpendicular.” By sheer force of faith and strength of purpose, they attack the impossible. And more often than not, they succeed simply because they are in partnership with God.

Here is the inside story of one of their biggest and wildest dreams: to transform an abandoned air force base into a campus for their small women’s college.

If, as the Gospel says, faith can move mountains, why not an entire college, lock, stock and test tube?

Sister Mary Gilbert tells the story with humor and penetration. Along the way, she introduces some of the women who made it work. No rubber-stamp nuns, but real people, they often had conflicting ideas of what should be done.

But they also knew that the cause was bigger than any one of them. As educators they were enlisted in the nation’s Number One defense.

By the time they had convinced the federal government, the whole town was on their side, and everybody turned out to help them move.

If you are tempted to underestimate the power of a woman, this is your book. We believe that anyone who is one the side of education and human understanding will respond to this quest for enduring values.

Told with the poet’s insight, the professor’s honesty, and the woman’s warmth, it cannot fail to inspire readers of every faith.