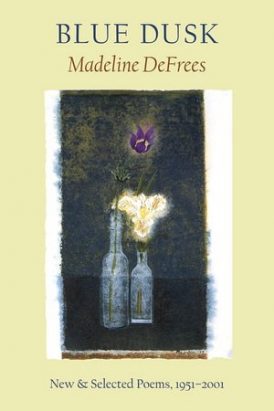 Concentrated, multi-layered, spliced with humor, and informed by her thirty-eight year tenure as a Catholic nun (she left the order in 1973), these poems are a study in contrasts. DeFrees’s world refuses to be drawn in black and white, as she balances presence and memory, mind and body. Her poems achieve the quiet clarity of a woman constantly emerging.

“Every poem is a demonstration of the principles by which DeFrees has lived her life, and we get the feeling that she is giving her life completely to each one….Like Dickinson, like the saints whose lives were personal expressions of divine energy, DeFrees is acutely aware of her mortality, but what we experience above all here is a fierce celebration of life in all its difficulty.”–Prairie Schooner

“DeFrees is committed to rigorous, even ritualistic, forms and a dense economy and precision of language. [She has] the ability to bend intractable words and phrases to her will.”–Poetry